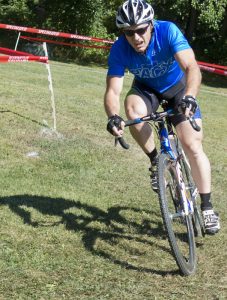 After a break for Thanksgiving weekend, I chose to race maybe my last time this season in Wrightsville, Pennsylvania at the Rivertown Cross Race. I’ve liked this course over the past years and have always raced very well here. I think it is more about where the race comes in the season than it is about the actual event. My health and fitness generally improves during the season so by the time this race comes along in early December each year I am hitting my peak. This year was no different, I was strong and rested.

There was very good competition at the event with Kevin Justice, Bob Reuther, Eric Schlauch, Kelly Cline, Mike Stevens, Marty Mrugal and Werner Freyman all in attendance.  Off the start I slotted in behind a strong Kevin Justice and stuck to his wheel as he churned around the course. After a lap or so it was down to me and the strong men mentioned but soon we started shedding riders so that by the second lap it was a five strong group of Kevin, Eric, Kelly, myself and Bob with all the others out of the mix. Our group fought on holding that order but with nobody able to gain an advantage.

Sitting 4th wheel I watched the others ahead of me and decided I needed to attack this group to make an attempt to break away (or at least disrupt the group and change the dynamics). About halfway through the race I picked my spot and jumped past Kelly and then Eric and Kevin and continued to mash the pedals. Kevin and Eric clawed back up to me but Kelly and Bob were split off.  In the penultimate lap Kevin attacked forcing Eric and I to respond. Kevin was very strong but we got back on terms with him and were together into the final lap. Kevin kept a furious pace and first I fell back then Eric dropped away. We fought on all just a few seconds apart and completed the race in that order.

I gained a podium but more critically, I stayed with Kevin and Eric through the race which is not easy to do. Kevin has been riding away from everyone the last half of the season winning by huge margins over the second placed rider. Eric is a talented rider that I rarely challenge deep into races. So, to race wheel to wheel with these two and to attack them deep into the race is a big result for me. Again this year, Rivertown was  terrific race for me.