When I decided to race this season, this was the race I targeted as my #1 goal. I planned and trained to be in top shape so I could make a run for the State Champion Title. I knew my competition very well from previous races (Kelly Cline, Mike Stevens, Marty Mrugal) and knew that I was one of the favorites based on my recent races.  The terrain at the course was good for my skill set with punchy climbs, and straight power sections. The one negative was my crash and injuries from the prior week. After a week of recovery and treatment, my rib cage was significantly better (still tender to touch, and some clicking and pain on deep breathing but I was able to ride hard).  In whole, the day looked promising. 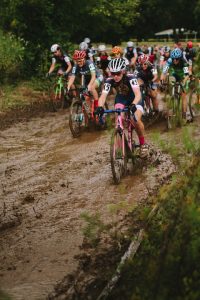 My race contained two age groups plus several out of state athletes so I had essentially two races to run: The overall 45+ race and then the 50-54 age group State Championship. I didn’t need to win the overall race to take the age group championship, I just had to beat my fellow competitors from Pennsylvania in my age group.

Off the start I took the hole shot and led for the first half lap. I set a hard pace which broke up the field immediately. As we settled into the first lap Kevin Justice, Bob Reuther and Brant Hornberger came to the front and began to pull away from me. I tried but didn’t have the legs to hold their wheel. I wasn’t overly concerned as Kevin and Bob were not in my age group and Brant was from Massachusetts so they weren’t my competition for the title. As much as I’d like to take the overall race, my main goal was the title.

After the first lap Kelly and Mike were out of the picture. By the close of the second lap Ray Zeimet from New Jersey attacked past me. I held his wheel for a partial lap but had to back off as he was flying. I was left battling with Marty Mrugal and Werner Freyman as we left the rest of our competition far behind. The three of us fought a good race with Werner and I attacking and dropping Marty which left he and I going head to head. Werner gave some strong attacks, but I was able to respond and in the closing minute of the race I gave one final attack and distanced Werner to roll in for an overall 5th place finish BUT I was the first Pennsylvania rider in my 50-54 age group meaning I took the State Title.